ReasonML with GraphQL, the Future of Type-Safe Web Applications

I made this graphic myself

ReasonML, also known as JavaScript-flavored OCaml, offers nearly impenetrable type safety for developing user interfaces. By adopting a static type system, you can eliminate an entire class of errors before your app is served.

If you’re new to both GraphQL and ReasonML, I’d suggest learning one at a time. Learning more than one big thing at once is often difficult for me. If you’re experienced with JavaScript and GraphQL, but want to learn ReasonML, read on, but keep the docs handy.

Getting Started - Establishing a ReasonReact Project

In order to get going with ReasonML, we must first install the cli, bsb-platform that handles bootstrapping the project. You should also get an editor plugin that helps with developing ReasonML apps. If you’re using VSCode, reason-vscode by Jared Forsyth is my preferred plugin.

This installs the BuckleScript compiler that turns our ReasonML into wonderful JavaScript which has already been type-checked and can be run in the browser.

Now we can initialize our project and hop right in.

With the project scaffolded, we can try to build it. In two separate terminal panes, run:

With all that taken care of, you can serve your build folder using http-server build or serve build and check out the project.

Before we can get to the fun stuff, we still must clear out the boilerplate and set up react-apollo.

Go ahead and remove the Component1 and Component2 files, and then update Index.re to the following:

Finally, create an App.re file and add the following:

You might have to re-run your terminal commands, but with all that said and done, you should have something like this appear on your screen:

It feels like a lot of effort to get started, but accepting early friction for a smoother experience later on is the tradeoff here.

In order to get set up with Apollo we’re going to run:

That looks like a big install command. It is, but only the first package, reason-apollo, is consumed in our ReasonML code. However, reason-apollo is a library of binding labels depends on these other JavaScript packages.

As that installs we can open up our bsconfig.json file and update the “bs-dependencies” and “ppx-flags” keys like so:

The “bs-dependencies” array tells BuckleScript to include those npm modules in the build process. The ppx flags array lets our IDE know how to handle preprocess certain directives, GraphQL in our case.

Create a file inside the src folder called Client.re. This is where we will declare our instance of the Apollo Client.

Note: If this uri, https://video-game-api-pvibqsoxza.now.sh/graphql does not work, please send me a message on twitter or here in the comments and I’ll update that as quickly as possible

When we work with ReasonML, any variable that we create with a let binding is automatically exported from the module for us.

With the instance created, we can reference it in any of our other .re files. Update Index.re to the following:

It looks a little like a standard React JS application, with a couple caveats. Notice that there are no import statements. In ReasonML, we have access to all of the namespaces built in our application. From the perspective of Index.re, We can see the Client and the App modules.

When we create a .re file in our src folder, it becomes a module. We could also declare our modules explicitly within our files.

It is now time to consume our API.

While writing this article I created a small Node GraphQL server, the code of which is available at this repo. To keep costs low, I declared an array of mock data to return on each GraphQL request rather than host a database.

Rather than create a todo app, I decided to create a list of video games that I played at some point long ago. Then, I could check if I finished it or not, thus remembering the games that I still haven’t beat.

As we are working with a GraphQL server, we should be able to figure out exactly how to call it by observing the schema.

Currently, we have one query and one mutation, both of which operate around this VideoGame type. A GraphQL adept will notice that every return value is non-nullable, that is, these responses cannot return unset fields or null objects.

Soon we’ll see why all of the !’s are particularly important for our ReasonML code.

Let’s begin by defining the query in on top of App.re, just below the component declaration.

Comparing with the JavaScript in react-apollo, this code would be most analogous to:

Here, we’re taking advantage of ReasonML’s coolest feature - pattern matching. Pattern matching combined with variants makes the logic that you would otherwise put in branches of if-else statements more linear and easier to follow. It is also reduces branch checking to constant rather than linear time, making it more efficient.

If the ReasonML code ever seems more verbose, just remember we’re still getting perfect type safety when it compiles. We still need to build the VideoGamesList component as well as define the videoGame record type.

Starting with the record type, create a new file called VideoGame.re and add the following:

The videoGame type as we have it here, has 4 fields, none of which are optional. The BuckleScript directive above it adds a pair of exported utility methods that allow us to convert between ReasonML records and JavaScript objects.

Tip: when Apollo returns a response, it returns untyped JavaScript objects. The jsConverter directive gives us an exported method called videoGameFromJs that we can use to map the Apollo query data to fully typed ReasonML.

To see this mechanic in action, create a new file called VideoGameList.re and add:

Note: Piping basically reverses the order of function calls to potentially improve readability. With the |> operator, the items object is applied to each function as the last argument.

Though I like prefer the piping style, the following are equivalent.

I think we are ready to once again compile and serve our project. If you haven’t already, run this command in your project root:

This generates a graphql_schema.json file that Reason Apollo uses to type check your queries. If your ReasonML app asks for a field that isn’t on the schema, or if it doesn’t properly handle optional data types, it will not compile.

The strict typing serves as a wonderful sanity check for writing queries and mutations.

When all is said and done, you should see the following. 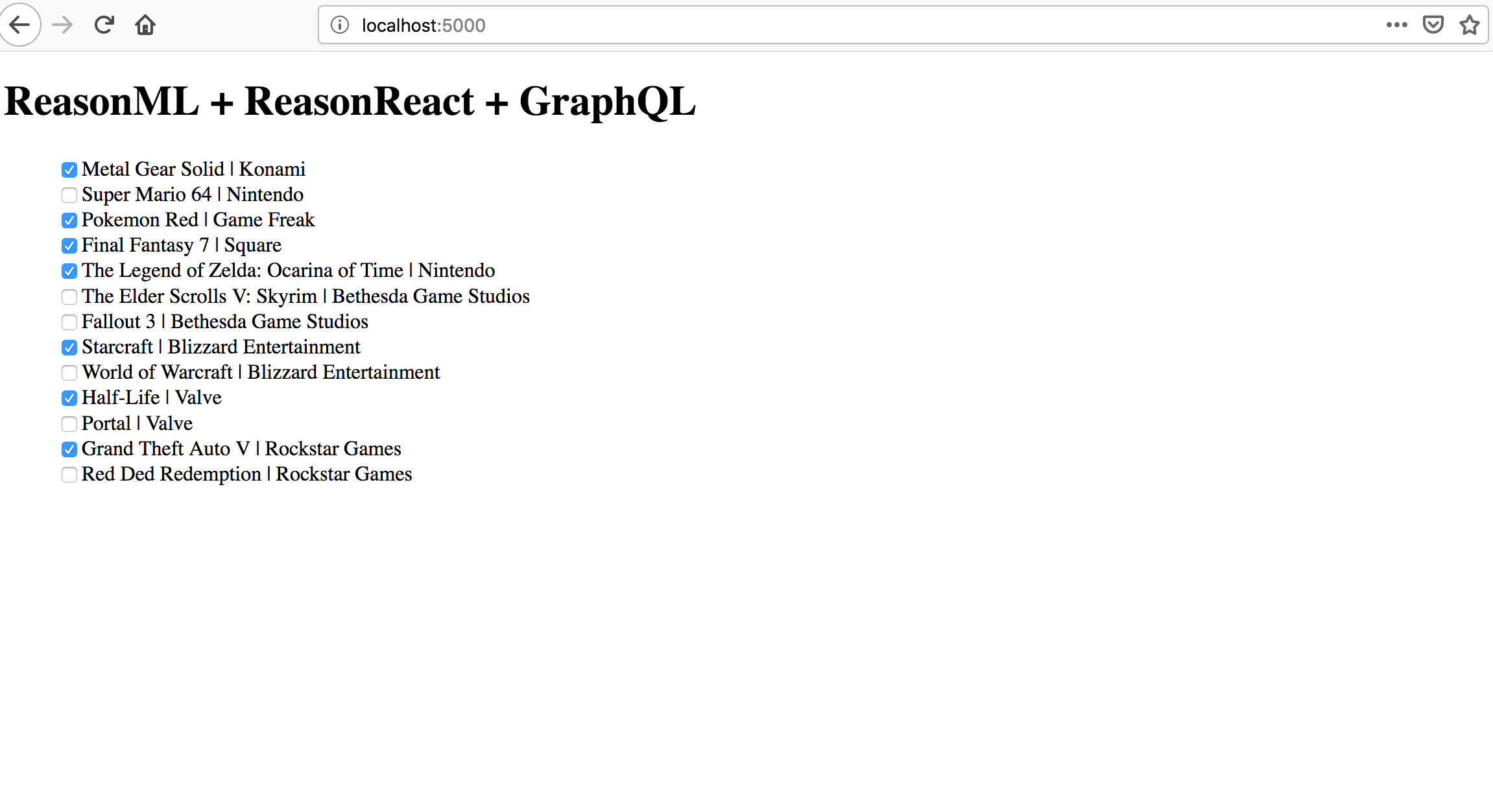 Don’t yell at me for not finishing the main story in Skyrim.

One thing you may notice thus far is that clicking the checkboxes doesn’t do anything. This is expected, since we have not yet wired up a mutation.

Let us begin by recalling our schema above, and creating a module for the mutation to mark a game completed.

Inside VideoGameList.re, add these modules to the top of the file just beneath the call to create a component.

For the render prop of the mutation, it’ll look pretty similar to the JavaScript version. I’ll put this code here and then walk through it, starting from inside the <li> tag.

Like the Apollo VideoGamesQuery component we used earlier, the CompleteGameMutation component we see here passes to its children a mutate function as well as a results object.

This particular component is not the best example to show off how you could use that results object, as I only take advantage of it when a single item is being updated. If it is, I color the text of the item label green and call that the loading state.

I’m no UX guy, but I think that’ll do for today.

ReasonML is a pretty powerful and expressive language. If you are new to ReasonML and itching to build some type safe user interfaces, here are some resources to learn from:

If you want to quickly set up your own GraphQL server then check out my other article, Learn to Build a GraphQL Server with Minimal Effort.

I hope to write more articles about ReasonML and GraphQL in the future. If these interest you then by all means follow me on Medium and on Twitter!

This article was originally published in Open GraphQL on Medium.